From September 12 to October 18 this year, the exhibition hall “Riga Art Space” Great Hall will offer its visitors the opportunity to be a part of the central event of the Riga Photography Biennale – the international exhibition “Screen Age II: Landscape”, curated by Inga Brūvere and Marie Sjovold (NO) in cooperation with the Association of Culture Institutions of Riga City Council and Riga Art Space.

Continuing The Screen Age, the series of exhibitions launched in 2018, the central exhibition of the Riga Photography Biennale turns to landscape. The series is based on the desire to find how the attitudes of people living in the digital and post-human era may have changed vis-à-vis one another and toward themselves. The first exhibition The Screen Age I: Self-Portrait questioned our relationship to ourselves and, using instruments available only to art, observed and registered: 1) models for a conversation with and about oneself, alien to previously existing societies; 2) new, comfortable, freely available structures for creating the self-image. Observations fully confirmed the suspicion that over the last 20 years, society has acquired new outer characteristics, due to the fast inflow of technological discoveries into daily life, and has caused a change in habits, but the very essence of man, their ethos, as well as wants, desires and other stimuli to action remain the same as many centuries ago. On closer view, of course, one cannot but notice some rather self-contradictory nuances in the ambitions, self-understanding, and attitudes toward others of the currently active generations, the so-called baby boomers, generation X, millennials, and generation Z.

In the second part of Screen Age we are undertaking a similar analysis of the change in people’s relationship to the landscape, not just the beautiful, Hegelian view of nature common in art history since the 19 th century or the no less common land art from the second half of the 20 th century. A landscape in fact is like a mirror that reflects changes that have taken place over thousands of years. These have been effected both by natural processes and human activity, therefore it can be said that landscape, which is a popular genre of visual art even in the 21 st century, includes both representations of nature and the urban environment, and invisible cultural-historical structures with ill-concealed ambushes of national politics and economy.br>

Ecology, for its part, has become the ideological impetus of and justification for the representations of contemporary landscapes. This is nothing new – as early as 1970, Robert Smithson explained his famous “Spiral Jetty” in the Great Salt Lake in Utah, saying in part: “People always thought that nature is self-sufficient, and that it was going to continue. Now nature itself is threatened. The dinosaurs lived and died and ice ages have come and gone. (..) There is no going back to Paradise or 19th century landscape (..). The sentimental idea of the landscape as a "beauty spot" is directly out of that romantic preoccupation with the landscape. (..)A lot of the working outdoors is just escapism because things are so horrible. People want to get out in the fresh air (..). The view of the earth polluting itself out is a death fear.*

The Riga Photography Biennial (RPB) is an international contemporary art event, focusing on the analysis of visual culture and artistic representation. The term ‘photography’ in the title of the biennial is used as an all-embracing concept encompassing a mixed range of artistic image-making practices that have continued to transform the lexicon of contemporary art in the 21 st century. 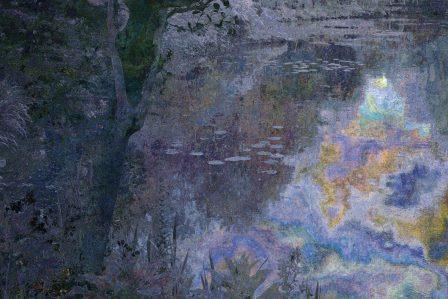