From March 28 to May 19, Sandra Strēle's solo exhibition "Nostalgia" will be shown in the Large Hall of the exhibition hall "Riga Art Space", showcasing a series of large-format paintings, continuing the artist's previous cycle "Melancholy".

Nostalgia – longing, usually smarting, for home or for something that has passed or has been idealized; willingness to return into the past. In the 17th century it was considered that “Nostalgia” is a curable disease of the flesh. Later it turned into a philosophers’ and poets’ problem – and became to be considered emotional weakness.

The artistic handwriting of young and promising painter Sandra Strele features emotional saturation and powerful visual expression that draws attention to deeply personal edges of human experience. Thus in her series of large scale paintings named “Nostalgia” the painter will continue her previous series of paintings entitled “Melancholy” and visually interpret a nostalgic, memory-awakening condition. The solo exhibition by Sandra Strele will offer the spectators an observer’s role in alien, however recognizable moments and scenes of daily life and surprise us with the warmth of the events – it will let the spectators feel as if entering a place of our childhood and finding that everything has changed and at the same time – nothing is still the same.

Artist Sandra Strele (1991) has a Master’s degree from the Art Academy of Latvia in painting. Before that, she as an exchange student worked and studied at the Royal Academy of Art in Antwerp. She has had several solo exhibitions and for the most recent, “Melancholy”, was awarded the prize “A Kilogram of Culture” in the category of visual art, received  SEB bank scholarship  for her diptych “Melancholy” and was nominated for the finals of the "Young Painter Prize" in Vilnius, Lithuania. In 2012, she won Inara Tetereva’s scholarship in art. Sandra Strele has also taken active part exhibitions in Latvia and abroad.

Curator of the exhibition: Luize Lismane

The exhibition is organized by: Association of Culture Institutions of Riga Municipality and exhibition hall "Riga Art Space".

The exhibition has been supported by Riga City Council and State Culture Capital Foundation. 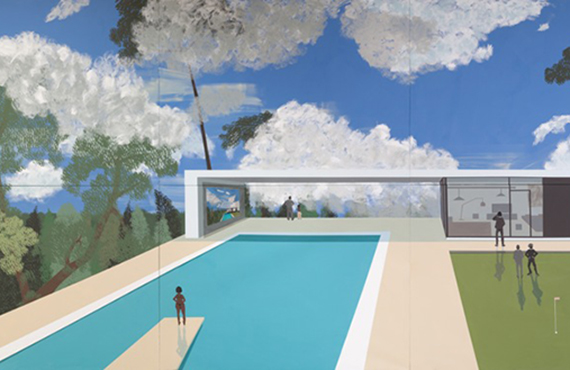