THE WORLD IN THE “NEURO-PATHWAYS”

“My work embodies the most incredible states of the soul, and in it, I comment on people and situations. My expression is poetry rather than prose because when I work, I break away from pragmatic tasks and follow the subconscious,” says the artist Māris Čačka.

He labels his work with compact titles, such as OV, MR, TC or JE. They identify the canvasses but give no further clues for interpretation. According to the author, the titles can hold the initials of someone’s name or represent an encrypted conversation in the real world or the fiction realm. Even if the initials were revealed in full, the visual impact of the canvass would give more information and ground for reading the work than the title. The initials are an intimate diary, not a public declaration. On the other hand, the works on paper in the Intro Hall are classic graphical art (paper, letterpress, congreve, water-based printing dye), and its thematic appeal stems from the footprint motif.

But what exactly are neuro-pathways, and where do they lead? The forty works in the Great Hall are portraits and dedications produced in the indefinite zone between painting and graphics, but their form is not figurative or even abstract. The artist intuitively grasps the scattered “substance” but does not cling to it in an attempt to mould a specific person or symbol. He sticks to what “thickens” only enough to get the visible. Some works may recall the exquisite darkness of Old Master painting, others resemble the variegated textile printing of the 1950s, and still others remind of the morphological computer art of the 1990s. Čačka’s every work can spark instant associations with something known, but the mirage dissolves just as quickly. The viewer’s attention is caught by the dynamism of the works – the self-movement of form seems much faster than it is in realism and abstraction, faster even than the formal dynamism cultivated in modern art, but its nature suggests primeval chaos rather than calculated intention.

The “internal speed” of the works and their densely emotional textures suggested the exhibition title – Neuro-Pathways. It is a lyrically stylized concept from the neuroscience vocabulary, and its main context is today’s humanitarian challenges – the crisis of human cognitive abilities in the conditions of so-called multitasking. As scientist Adam Gazzaley puts it, in many ways, we are an ancient brain in a high-tech world. “The conflict is between our goal-setting abilities, which are so highly evolved, driving us to interact in high-interference environments to accomplish our goals, and our goal-enactment abilities, which have not evolved much at all from our primitive ancestors, representing fundamental limitations in our ability to process information. It is this conflict that results in goal interference and generates a palpable tension in our minds – a tension between what we want to do and what we can do.”1

Čačka’s work is a palpable visual metaphor for this current state, when an abundance of goals and interferences break out into sudden and surprising reactions, fragmenting and traumatizing ideas, creating an “impossible” technological mix, forgetting historical boundaries and forming unprecedented hybrids. Our ancient brains, which have humanized us by their tendency to perceive the “insignificant,” continue to do so today, but in the age of technology, the information flow becomes disproportionate and keeps “hurling” our minds through thousands of neuro-pathways. To paraphrase Gazzale, we can visualize Neuro-Pathways as a conflict between a mighty force, represented by our goals (in the context of this exhibition – intuition and imagination), which collides head-on with a powerful barrier, represented by the limitations to our cognitive control (material resistance and scale). Something deeply romantic, even tragic, flashes in the description of this contemporary clash. Farewell, the clear concepts of modernism, farewell, the apparent control of postmodernism. As a gardener, Māris Čačka hybridizes his works in a stylistically fresh (post-post) and aesthetically original form, and they race towards the unknown, at great speed and with intense romantic fervor. Their textures flash the values of historical romanticism – lyrical dreaminess, heroic elation and transformed tradition (embodied, for instance, by the Latgale glazed pottery greens or the grassy greens), and visible manifestations of sincere and profound reflections displayed for popular entertainment.

Čačka admits that he used to define all his work as “graphic art”, including the canvasses, because they are made with graphic techniques such as monotype, flat print, and others. “But I also deliberately use the technical “wrongs”, such as wet-on-wet or slippage,” he adds. One of the ways how contemporary painting develops is by absorbing various techniques, also graphical, and Māris Čačka contributes to this with his Neuro-Pathways (incidentally, this has also been done by other Latvian artists: Jānis Mitrēvics has used screen printing as the “drawing” in his oil paintings of the 1990s; Kristaps Ģelzis has been integrating intarsia in his “film paintings” since 2011, and Sandra Krastiņa has been reusing her own templates, to name just a few).

In contrast to the Great Hall, the Neuro-Pathways in the Intro Hall are sophisticated graphics based on tradition. We see Čačka’s technical skill and a consistent poetic message in recurrent motifs of the bright blue color and traces of tiny footprints or scattered petals that seem to be leading us through the exhibit. At first glance, the works seem lyrical and playful, toying with the technical possibilities of congreve on paper and silver-metal laminated cardboard. But the two exhibition spaces are actually surprisingly close. If the visual language and content of the Great Hall echo the 21st-century cognitive crises, a distinct chronology of crises also applies to the Intro Hall – the works displayed there may be perceived in the context of a culture that emerged a century earlier when human spirituality came to be strongly affected by psychoanalysis. Freud was among the thinkers of the post-Christian era who challenged the world by formulating the libido and erotic dimension of life and argued that a future without illusion requires working with oneself and tending “one’s inner garden”. Čačka takes us in just into such a garden – the blue and speckled graphics in the Intro Hall are aestheticized pathways for overcoming one’s private neuroses. In this exhibition, the author opens up about himself and the people around him with ultimate tact and discretion and, to borrow from the neuroscience vocabulary, embodies the highest levels of cognitive ability – wisdom and feeling.

Māris Čačka was born in 1976 in Varakļāni. He holds a Master of Arts degree (2011) and a Doctor of Pedagogy degree (2009) from Daugavpils University. Since 2020, he has been at the helm of the Daugavpils Mark Rothko Art Center as its director, having stepped up from the Program Director position he held from 2013 and 2020. His previous professional life has been in academia when he led the Department of Arts at Daugavpils University (2006–2010) and chaired its Computer Design Program (2004–2012). As the founder and head of the Art Teachers Association (SIVIA) in Daugavpils, he is also affiliated with the Latvian Chamber of Graphic Art. Dating back to 1997, Čačka’s exhibition record extends across Latvia, Belarus, Lithuania, Italy, Sweden, Germany, Ukraine and Poland and includes more than ten solo shows, most notably, Indefinite, Definite and Presented at the Latgale Culture and History Museum in Rēzekne (2016), Definite and Indefinite Dialogues at the Art Station Dubulti (2018) and Dialogues at the Daugavpils Museum of Local History and Art (2021). In his free time, Čačka is a passionate gardener who grows flowers and edible things on his land.
Inga Šteimane is an art critic and curator, founder (2015) and director of the Art Station Dubulti. She curated Latvia’s pavilion for the 57th International Venice Art Biennale (2017) and has been heading the Džemma Skulme Art Space project since 2021. 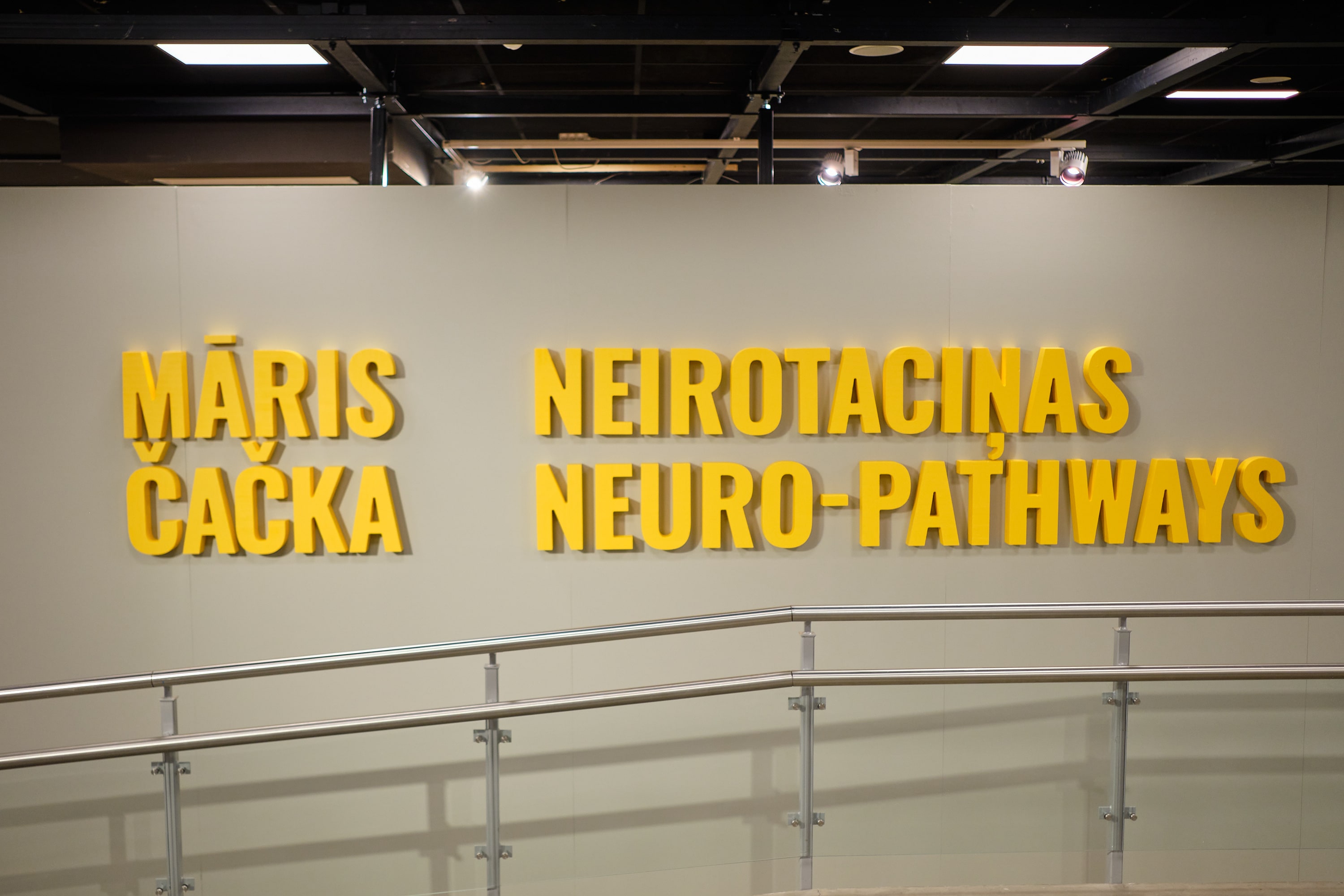 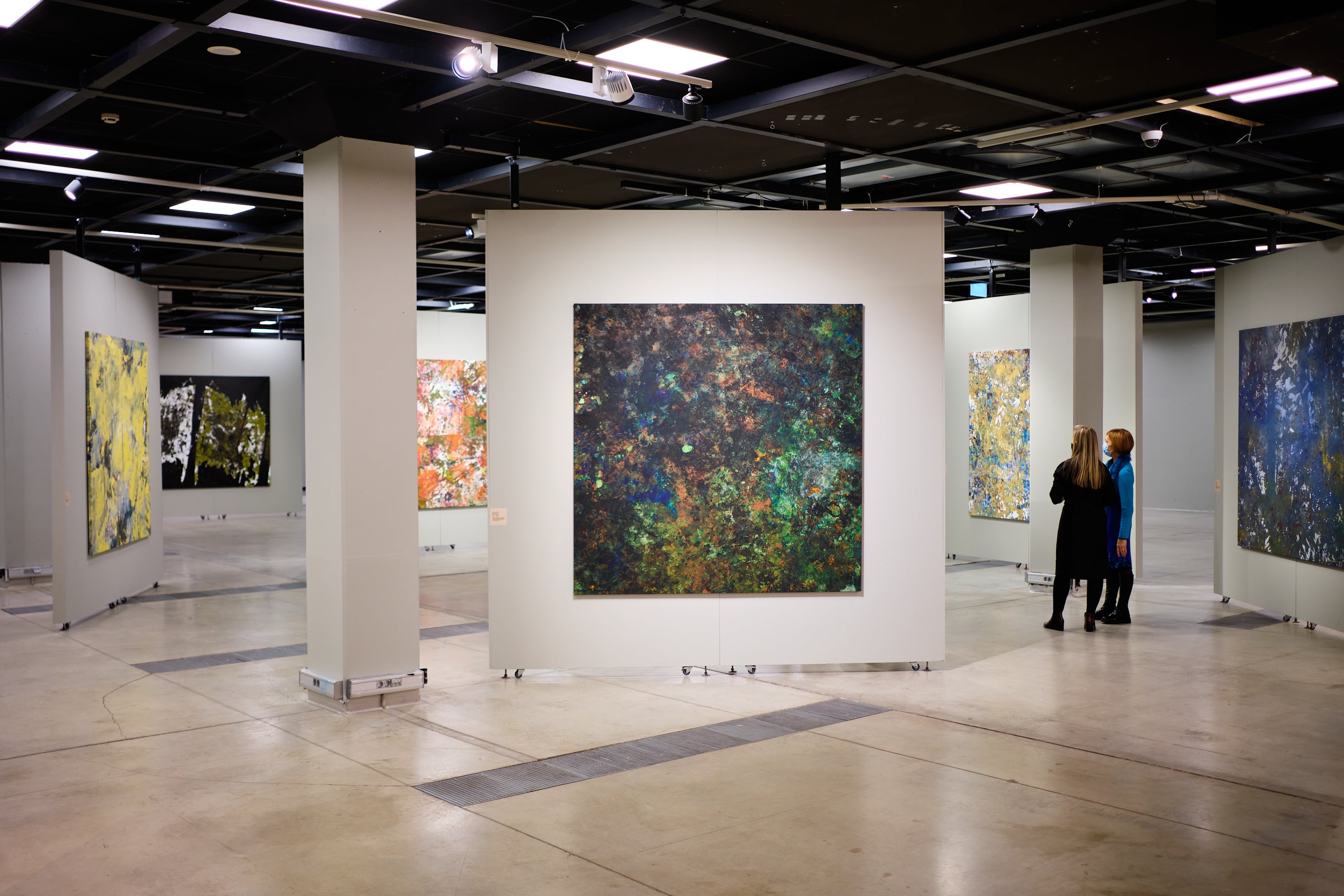 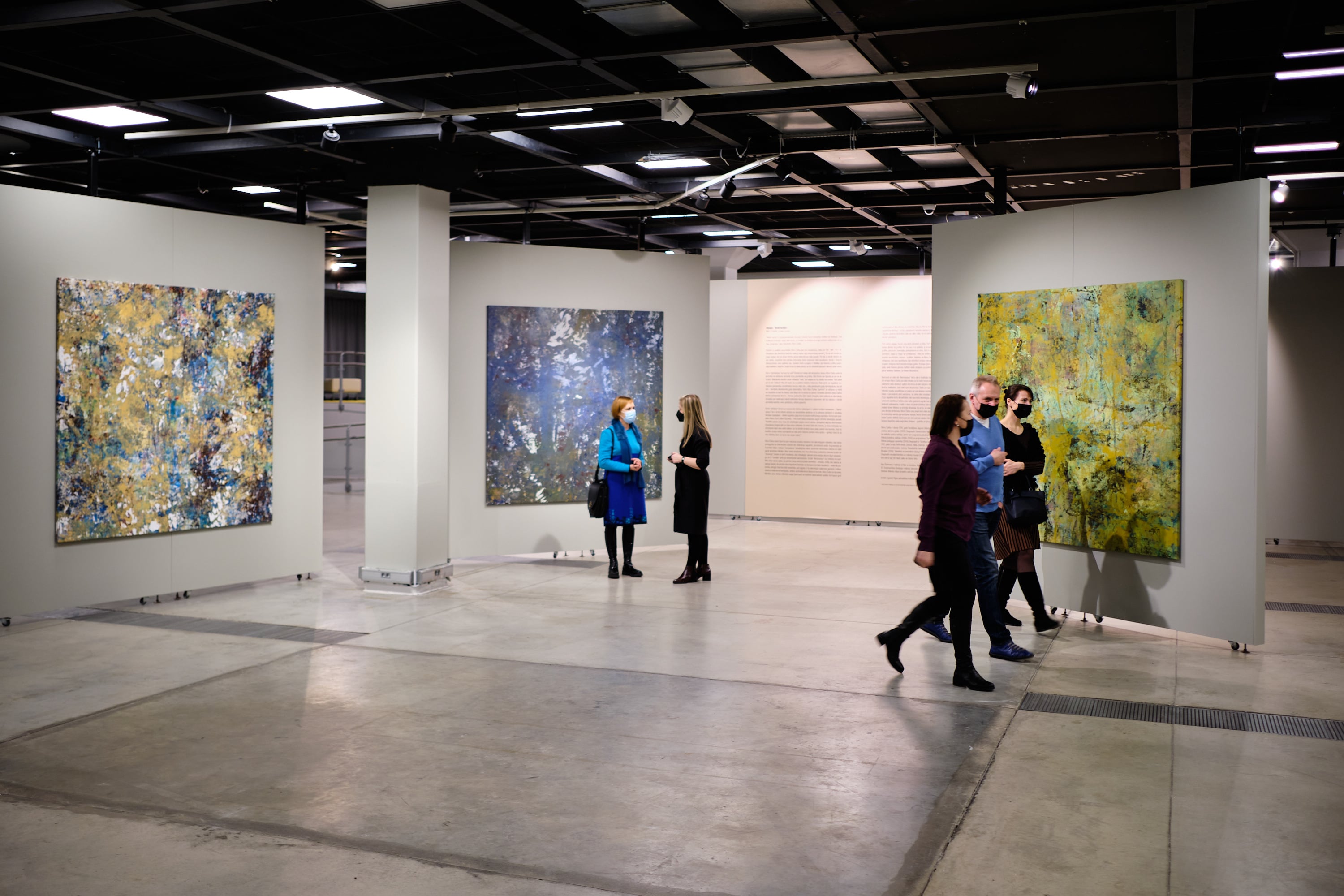 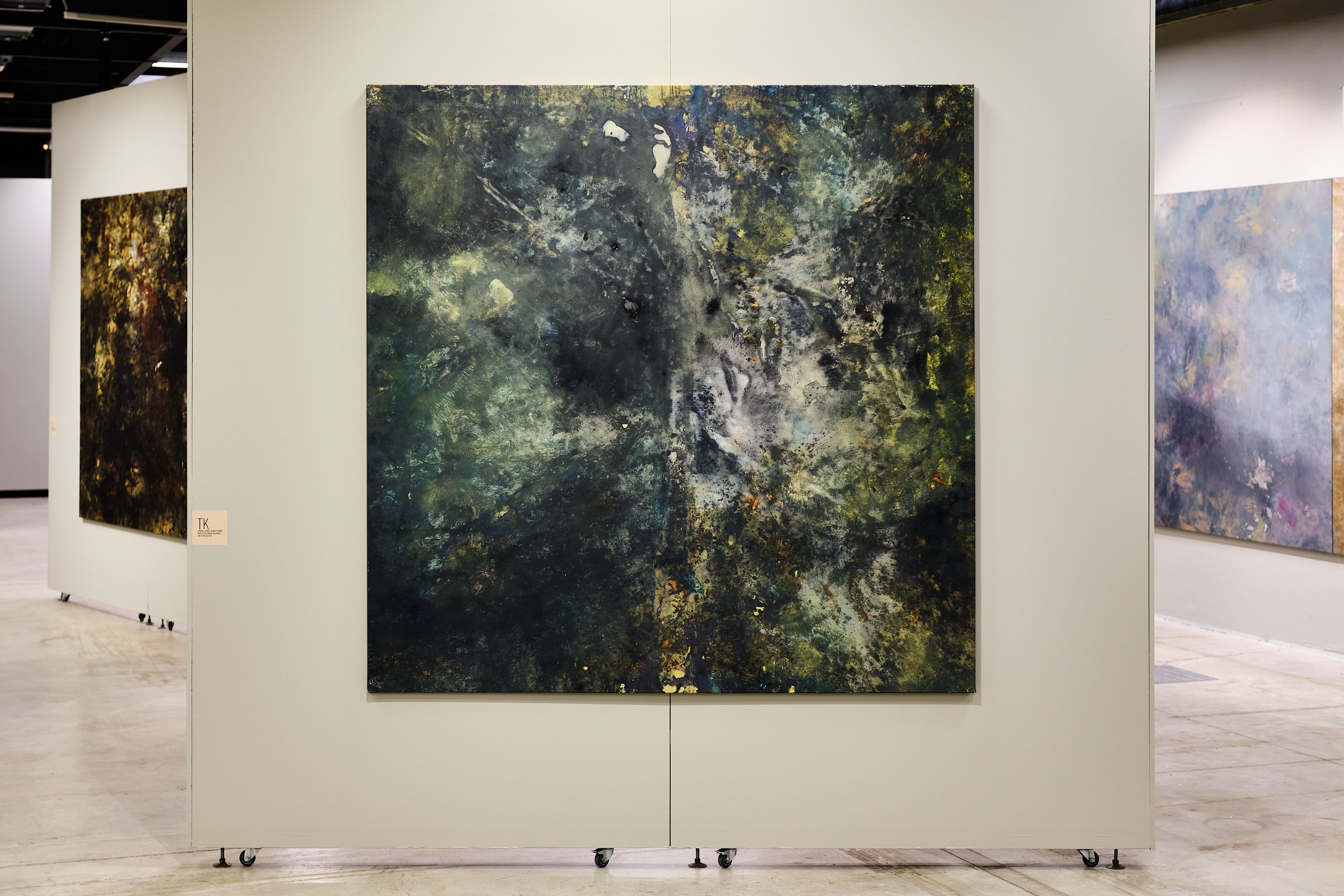 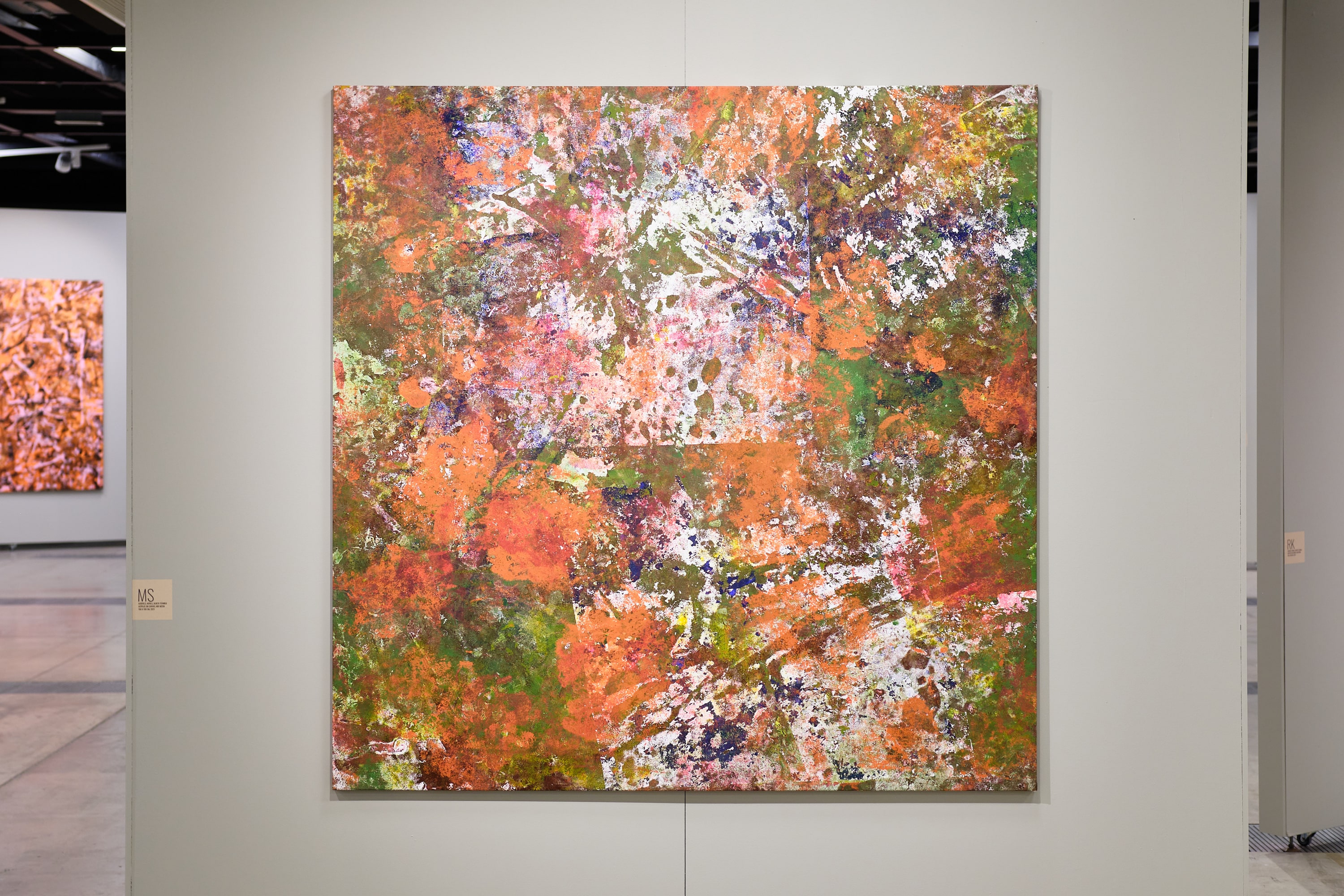 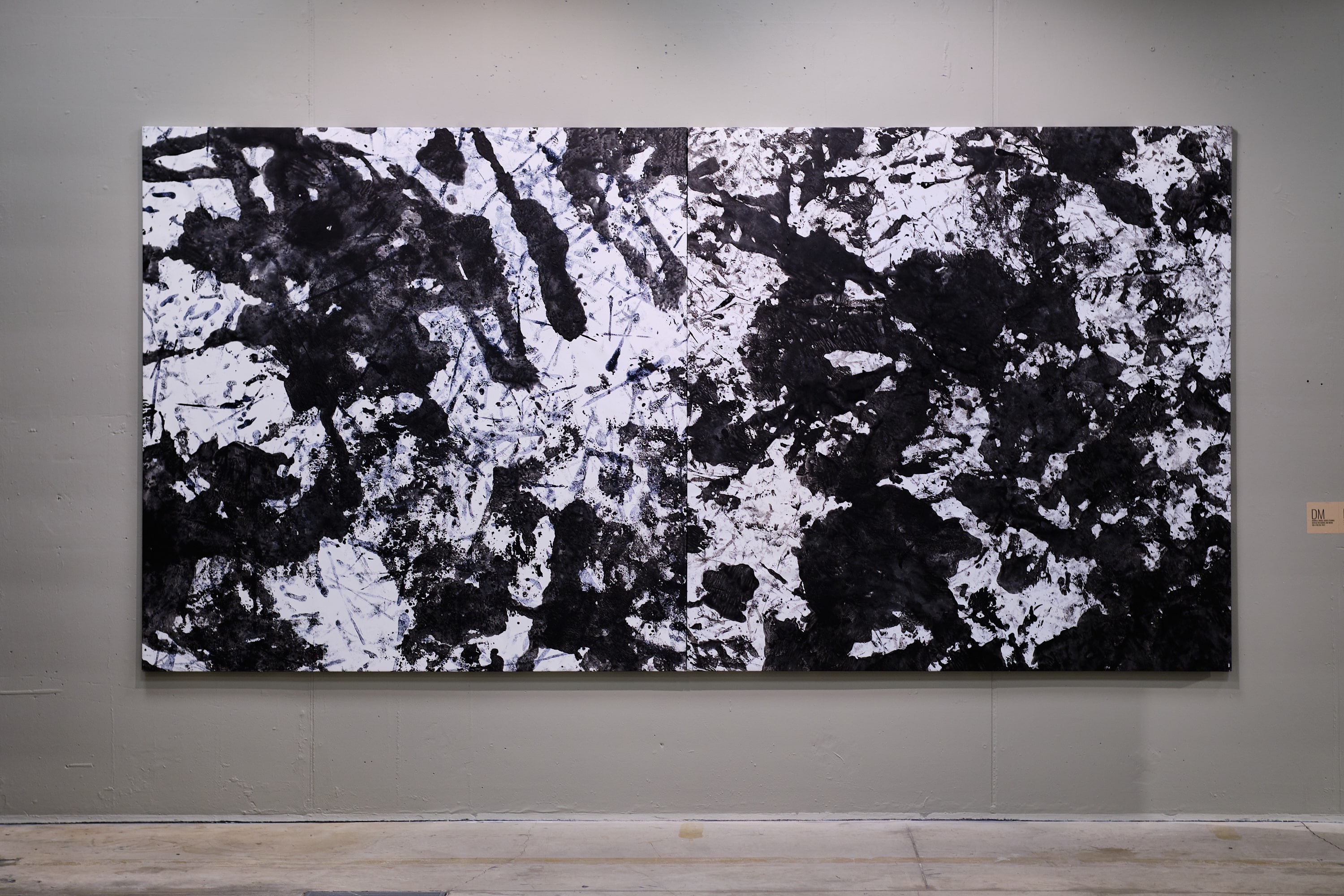 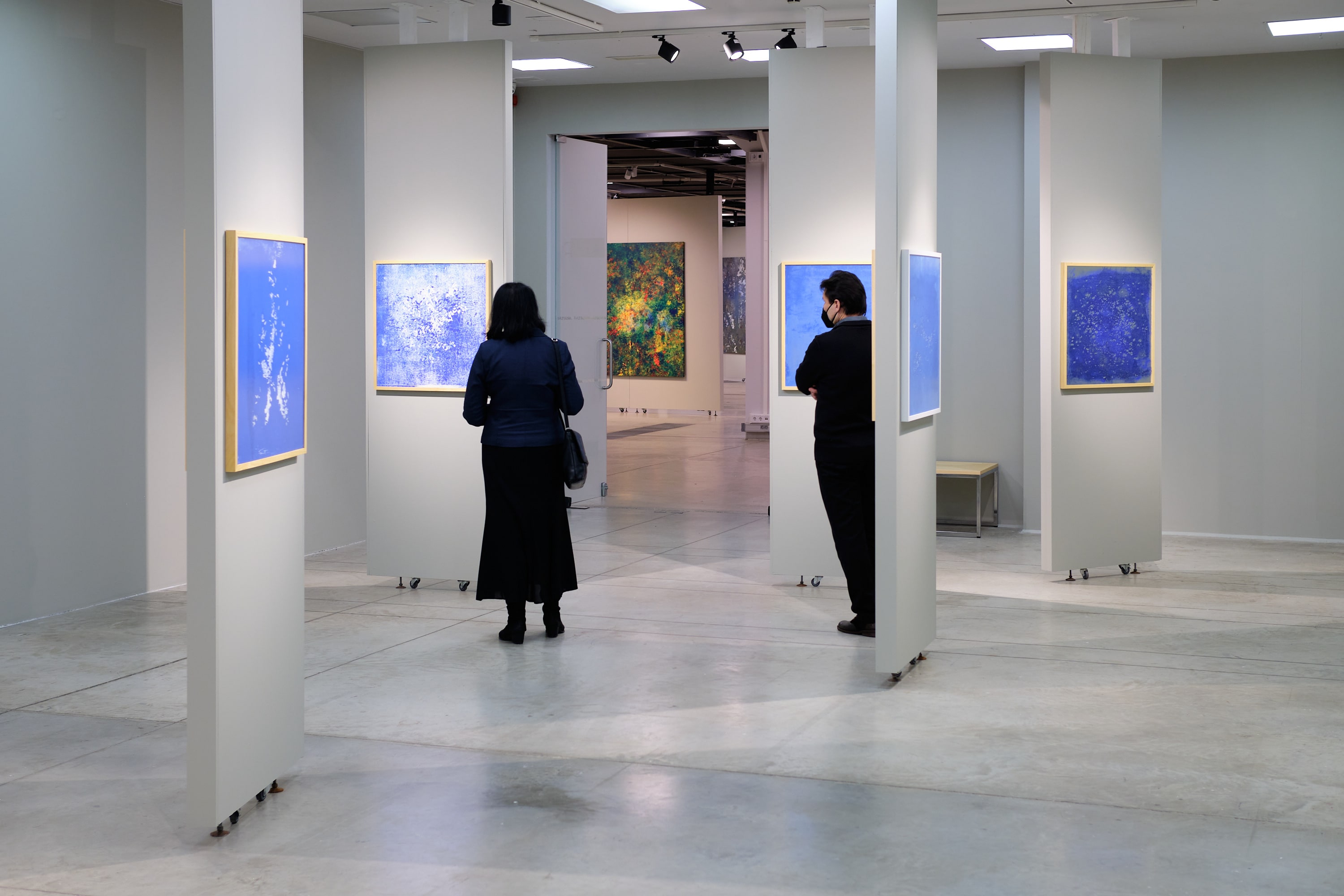 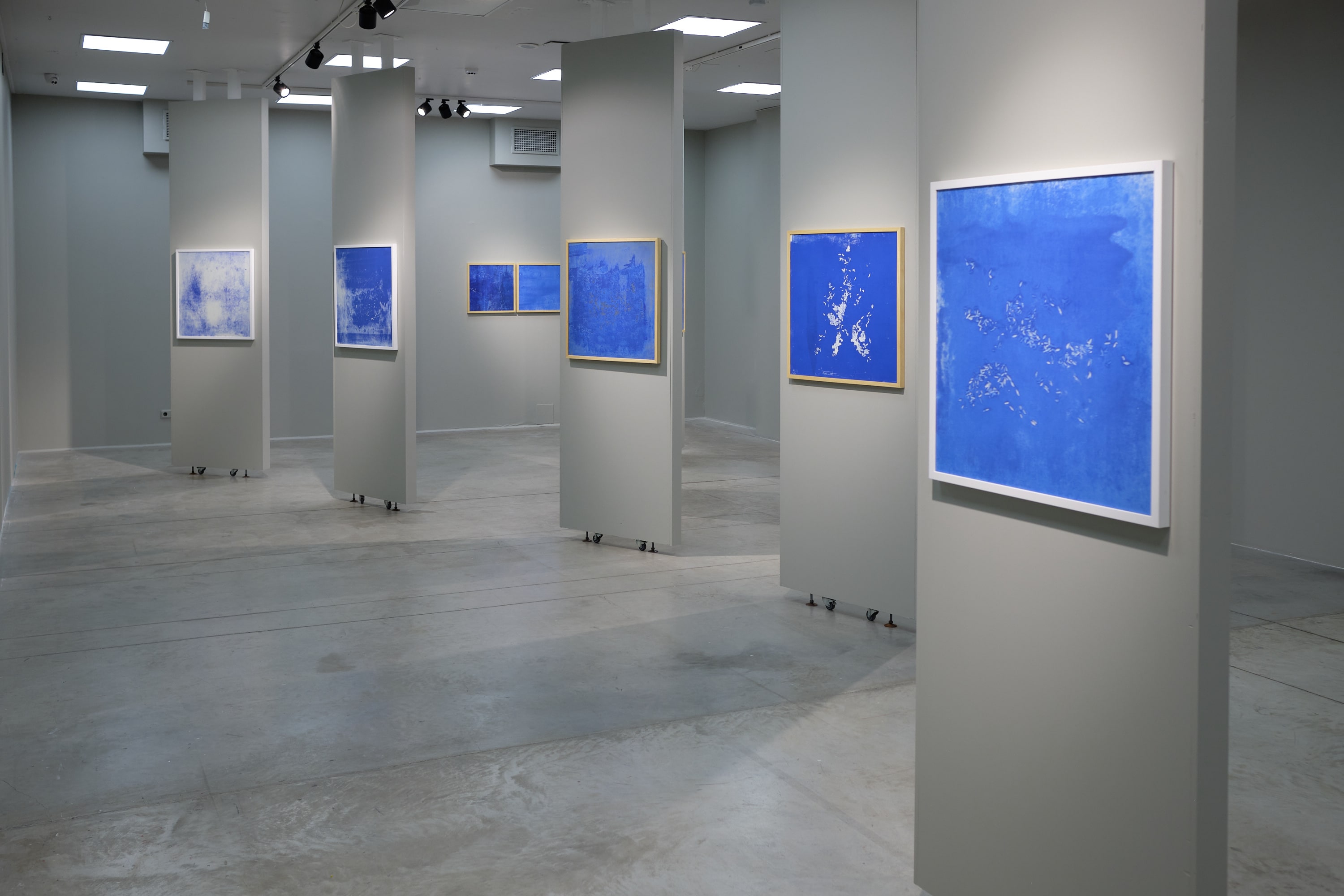 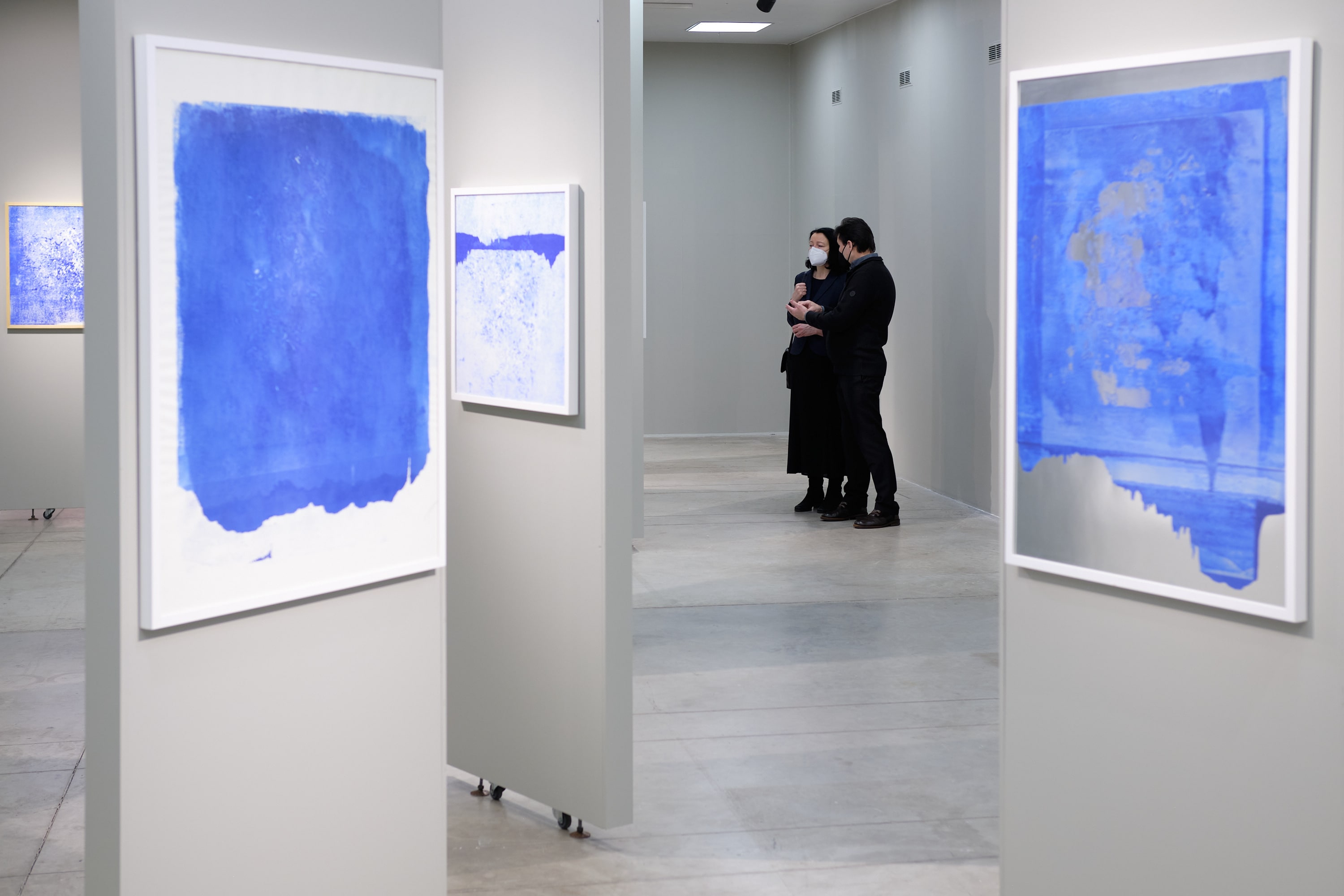