Lecture ‘Photo Postcard as a Field of Creative Experiments in the 20th Century: Staging, Montage, Colouring’

From the late 19th century and into the 20th century, photo postcards served as a form of public communication and as a reflection of moral values, lifestyle, and aesthetic ideals. The cultural history of the 20th century also shows that this small format of photography was widely used for creative experiments and, in the words of Salvador Dali, became an “experimental base for the study of the modern popular unconscious thought”. While the growth and popularity of postcards in the late 19th century was fuelled by the boom in lithography and other printing techniques, including collotype and colour lithography, the first half of the 20th century became the golden age of the photo postcard due to the reforms introduced by an American company – the Eastman Kodak Company.

In 1902, the company issued postcard photo paper and in 1906 the owner of Kodak, George Eastman, introduced his ingenious invention to the public – the portable No. 3A Folding Pocket Camera. This pocket camera facilitated the photography process and most importantly, the camera and film were devised in such a way as to produce a postcard-sized photograph. Because of these innovations, the photography process and the production of photo postcards quickly gained enormous popularity among professional photographers, publishers, and in workshops, as well as among amateurs from all walks of life. An incredibly fierce competition for the consumer's wallet, so to speak, and attention ensued. All these innovations unleashed the makers' imagination, and the photo postcard became an intense, extraordinary, and bold field of creative experimentation. Starting with staged settings spanning various topics and environments and performed by professionals and amateurs alike the process encompassed a wide range of manipulations with negatives and / or positives – retouching, montage, and colouring, which usually entailed meticulous labour by hand. Colour as a means of expression acquired just as many uses. Some of the methods that were widely used included negative techniques, like tinting glass plates or film frames, as well as positive techniques, like colouring the postcards with watercolours, aniline, tempera colours, or adding appliques, gilding, and details out of various materials such as bird feathers, human hair, glitter, fabric, embroidery, etc.

The lecture provides an insight into the history of the development of photo postcards and focuses on creative, as well as amusing, examples of experiments with staging, montage, and colouring from the turn of the 20th century until the 1960s. The presentation features samples of photo postcards from Tsarist Russia, as well as from German, French, and Italian companies that were popular during the interwar years in Latvia together with works by the leading publishers in Latvia – P. Slavinskis’ publishing house, Fotobrom, ERBE and Krīvi. In turn, photo postcards made in the mid-20th century by anonymous amateur photographers attest to the imagination of ordinary people and an unquenchable thirst for “authentic” beauty bursting with colour. 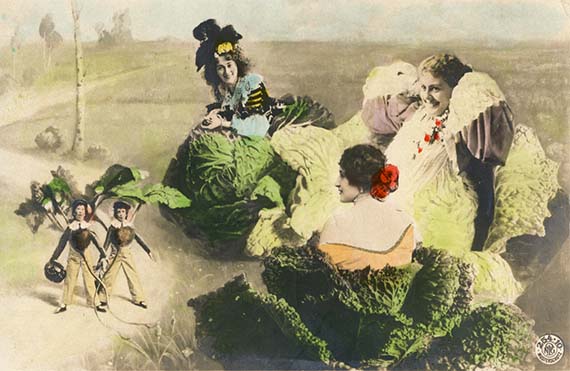